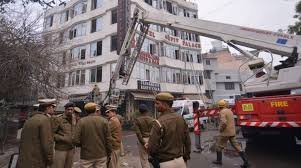 New Delhi: After a massive fire broke out in the New Delhi’s Karol Bagh area, the blaze has claimed 17 lives including one child. Several other rescued guests were rushed to hospitals and are reportedly, in a critical state.

#UPDATE 17 dead in the fire that broke out in Hotel Arpit Palace in Karol Bagh today pic.twitter.com/gryVMFDzzj

The fire broke out around 4 am on Tuesday and speculations are that the fire broke out due to short circuit but the authorities are yet to confirm. More than two dozen fire engines were sent to the Arpit Palace in Karol Bagh. The area is lined-up with hotels and markets.

UPDATE | 17 people killed in #Delhi hotel fire. 5 people injured. Wooden panels inside the hotel contributed to the fire. @AlokReporter gets the latest. pic.twitter.com/e6Lyb1oFqu

The victims were rushed to Ram Manohar Lohia Hospital and Sir Ganga Ram hospital for treatment. The authorities have rescued more than 35 people and some people were even seen jumping from five-storey building in order to save their lives said, Virendra Singh, the deputy fire chief.